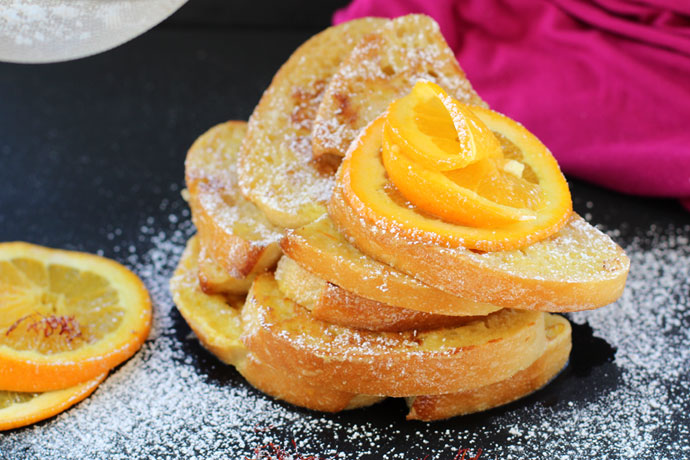 French toast is a simple breakfast. Crusty bread soaked in egg for a bit, laid to crisp in a hot buttery pan, then topped with fresh fruit. It’s French but easy. So what is the medieval recipe for french toast?

Medieval French Toast is a luxurious spin on sourdough french toast with rosewater and saffron. You beat the egg with rosewater, and then drizzle saffron-steeped rosewater over the top of the cooked toast.

The rosewater gives the french toast a floral note, and the saffron an yellow-orange hue. I’ve paired it with sliced oranges and I think all three flavors really meld together.

History Note: In The Medieval Kitchen: Recipes from France and Italy, this french toast is described as Medieval Italian. In those times, french toast was served with game meats such as venison and also peacock.

The saffron is mainly to color the rosewater and only adds a slight flavor dimension. As saffron is one of the world’s most expensive spices, this medieval recipe would have been only for the upper classes.

After drizzling with the saffron-infused rosewater, dust the French toast with a nice coating of powdered sugar. I’ve topped mine with oranges because I think it balances the flowery scent of the rosewater well. And looks pretty with the yellow-hued toast! 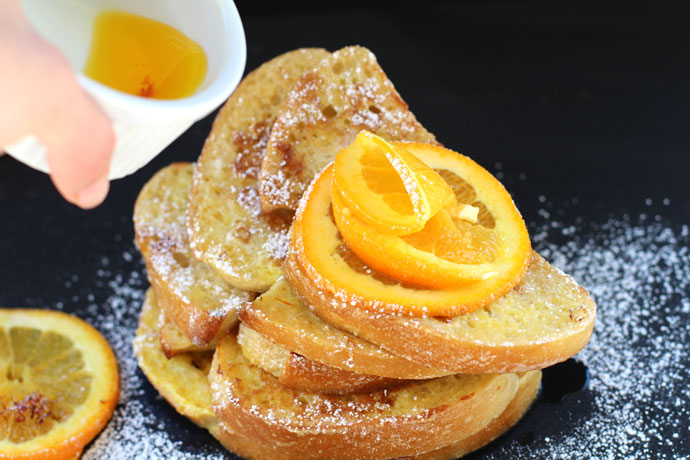 With all these exotic ingredients, you can pass on the syrup!

For more rosewater recipes, my Marzipan Mug Cake will transport you to Europe in just 2 minutes. Saffron, of course, is perfect in this easy paella and in any kind of rice.

Medieval recipes are rich but taste delicious! I’ve also come across a recipe for cinnamon toast that calls for mixing cinnamon, sugar and wine into a paste and spreading it on bread. As you can see, breakfast is better when it’s a grand affair.