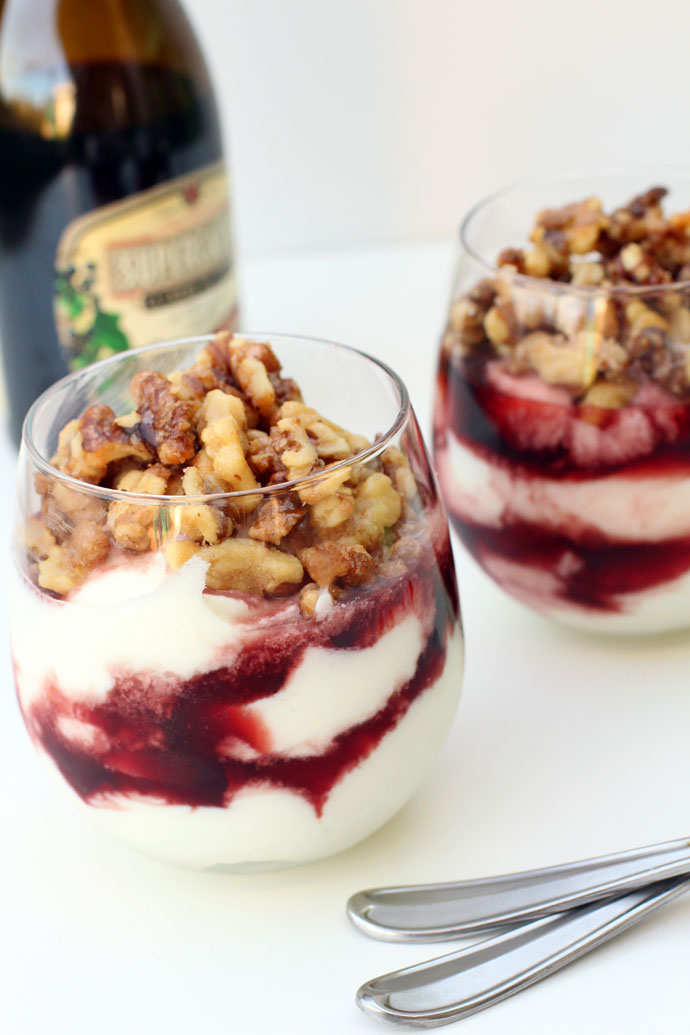 We were sitting in a sunny plaza along the Burgundy wine trail, Route des Grands Crus, in France. We had a small bottle of Creme de Cassis, blackcurrant liqueur, that we’d bought from the Cassissium, a museum dedicated to the blackcurrant, cassis in French.

We’d just come from the supermarket Intermarché with yogurt cups for a mid-day snack. As we sat eating the plain yogurt, we had an amazing revelation. Why not pour a little liqueur in the yogurt?

All of a sudden, it was a boozy blackcurrant parfait with the delicious jammy taste of blackcurrant swirled with creamy yogurt.

Blackcurrant isn’t a popular flavor in the U.S., but it is in Europe. And you can buy a bottle here that’s right out the town we were sitting in – Nuits-Saint-Georges, part of the Cote de Nuits wine region in Burgundy. 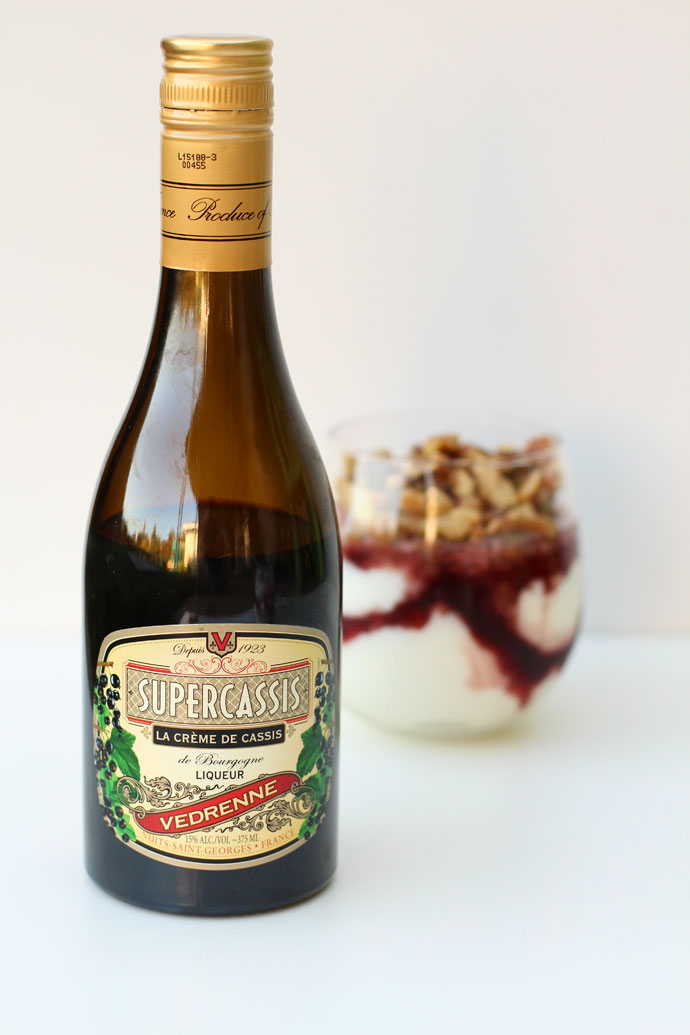 We’re carry-on people, so I couldn’t bring this back from France. I bought it at BevMo!

Creme de cassis is a syrupy sweet dark red liqueur with an earthy blackberry kind of taste. It’s most famous use is in a Kir — the liqueur is mixed with white wine — or in a Kir Royale, mixed with champagne, specifically Crémant de Bourgogne.

But the amazing flavor goes perfectly with yogurt. This parfait recipe get its crunch and extra sweetness from candied walnuts. It’s a French-inspired dessert that’s so easy to make.

I didn’t candy any walnuts on that bench in Burgundy, but it’s so simple I could have. Melt some butter in a pan, toss in some walnuts and sugar and stir constantly until they look glossy and coated with sugar.

Spread them out on parchment to cool, separating the pieces quickly before they fuse together. 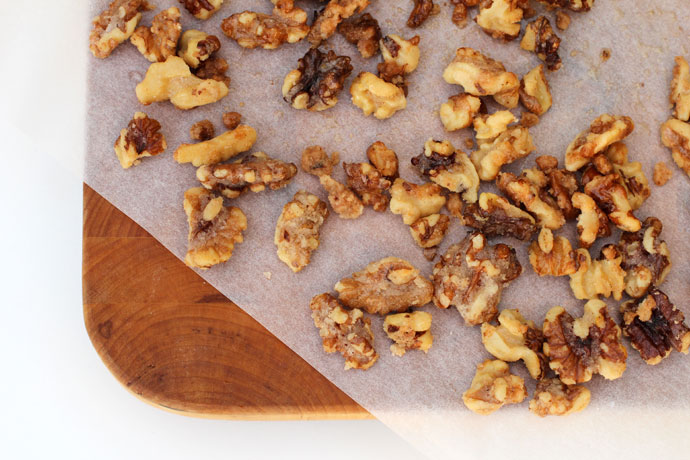 Put some yogurt in a stemless wine glass or glass bowl. Top with creme de cassis, more yogurt then more creme de cassis and walnuts. Voilà! A no-fail French dessert in about 10 minutes. 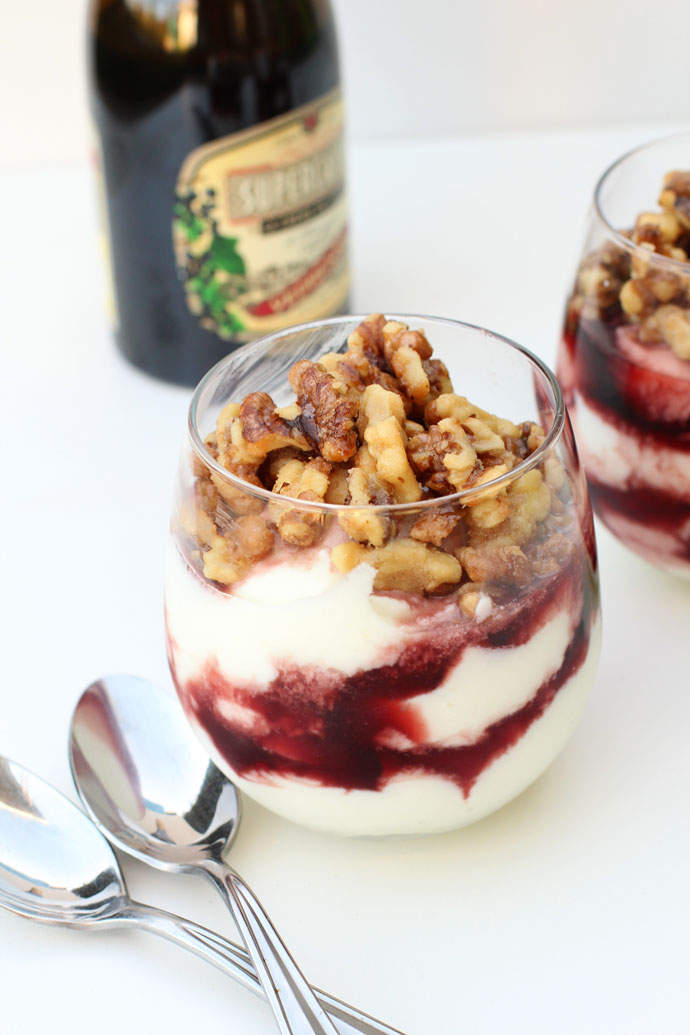 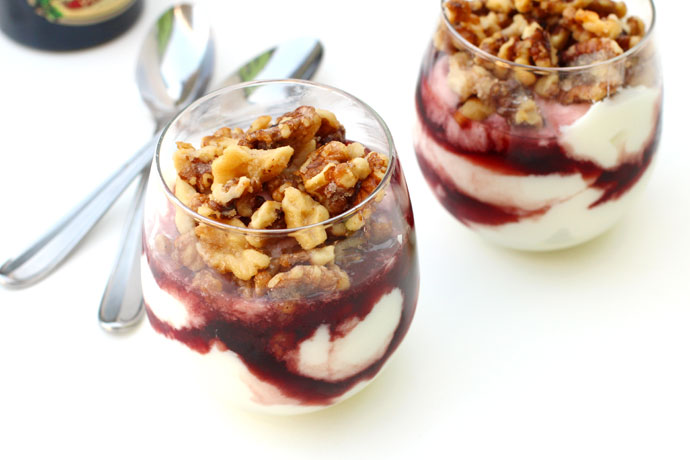