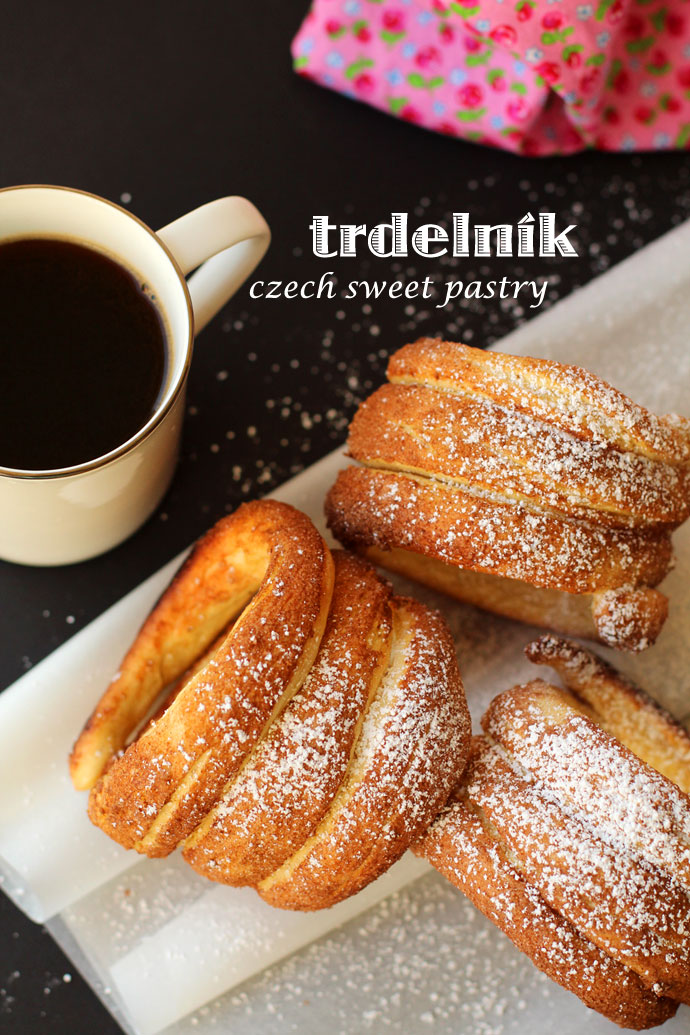 We stood in Prague Central Station, the 3 of us starving after a long afternoon train from Berlin. Our bags were on our backs, and then we saw it out of the corner of our eyes — dough baked over an open fire, spinning on rods, dressed with nuts and cinnamon — the Czech sweet pastry trdelnik.

Trdelnik baking in a store window in Prague.

It was the most amazing smelling baked treat one could imagine. All that was standing in our way was the language, the lack of directions to our hotel, and a cranky 4-year-old.

You can guess what happened next. Well, maybe not. Like all good travelers, we did a little trdelnik research first. We passed by a bunch of street carts and store windows selling the famous Prague pastry.

Finally, we caved in just over the Charles Bridge.

Man, it was worth it. We savored the little pieces of sugary dough all the way up to Prague Castle. The Castle is one of the most architecturally fascinating places I’ve ever seen — so much detail in the gothic carvings. 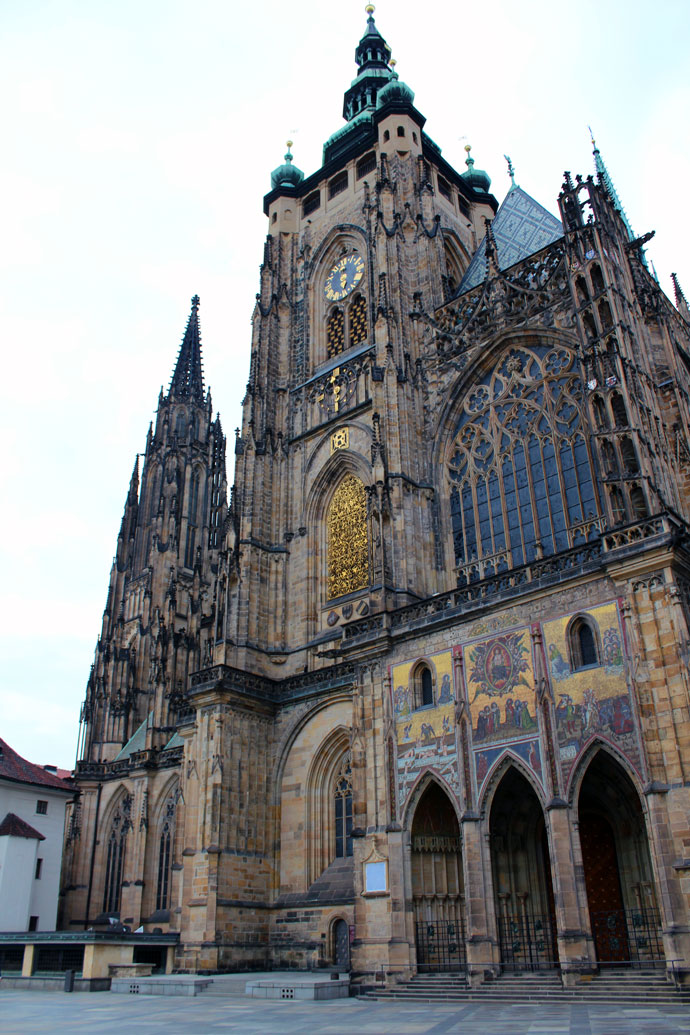 The largest ancient castle in the world…

Later we walked through Old Town Prague and saw the Astronomical Clock, one of the oldest clocks. 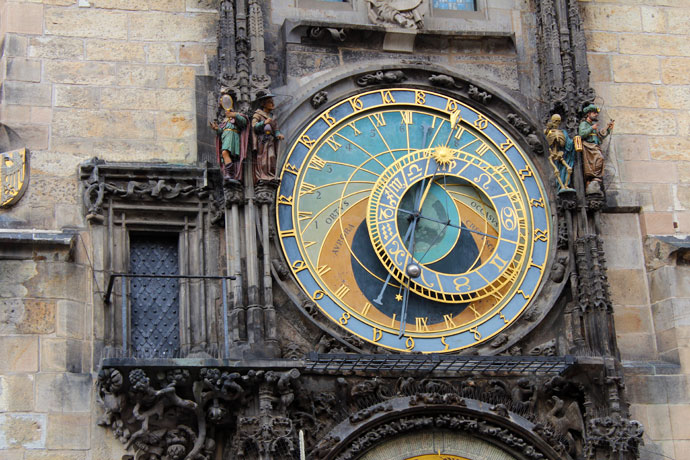 The beautiful blue and gold clock was made in 1410 and still works!

And the smells of the pastry were with us wherever we went.

Trdelnik was one of our first introductions to the Czech language and Prague street food. I know it sounds like a Czech “turtleneck,” but a great dessert doesn’t require proper pronunciation.

Even if you aren’t hopping the next train to Prague, you can definitely make this sweet pastry, sometimes called a chimney cake, at home.

To make the Prague pastry called trdelnik, street vendors roll out dough into long snakes then wrap it around the trdlo rod, which is about 3 feet long. They top it with walnuts or cinnamon sugar, then set the rods over the coals to bake the dough and crisp up that yummy coating on the outside.

I’ve always associated good memories of a place with dessert, so today I’m sharing a trdelnik recipe. It’s one you can make at home in your oven without trdlo roads or a giant BBQ.

Trdelnik is made with a yeast dough, and you’ll want to proof your yeast if like mine it’s been sitting in the back of the fridge for a while. Warm some milk to 100-110 degrees, add a little bit of sugar and the yeast and let it sit for 10 minutes. If it bubbles, it’s good.

Mix the flour with the sugar, then with a stand mixer, blend in the eggs and softened butter on low speed.

Add the rest of the milk in slowly until it begins to come together and resemble a dough. Take it out of the bowl and knead it on the counter by hand for 5 minutes until smooth.

Put the dough in a bowl and cover with a damp kitchen towel. Let it rise in a warm place for 30 minutes.

Meanwhile, create your own trdlo rods by wrapping 8 oz. jelly jars or BPA-free cans with foil. Jelly jars are awesome to have around for homemade dressings and pickled treats! 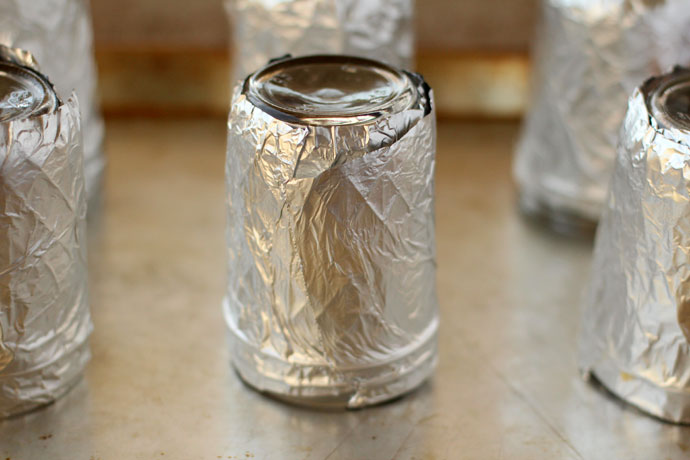 Separate the dough into 6 pieces and roll out to snakes about 2 feet long. Rub cold butter on the foil-wrapped jars and wrap the dough snakes around the jars. 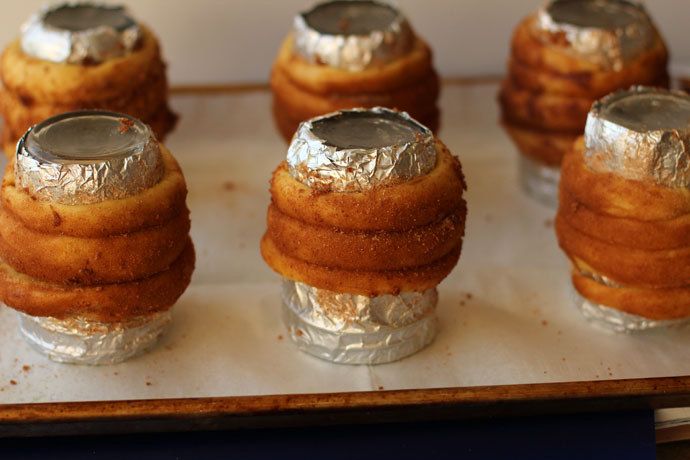 Baste with egg wash and roll in cinnamon sugar. Best when served immediately with coffee or espresso! 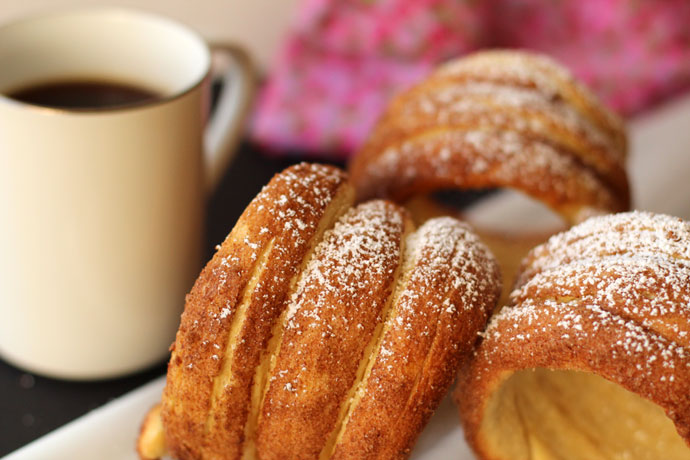